Deliberate elaboration of favoritism and Nepotism in a Workplace

Despite the larger push for transparency in the workplace in terms of hiring policies and promotions, nepotism and favoritism continue to mar the corporate world. It is often seen that deserving candidates often go unhired or do not get proportionate growth opportunities as CEOs or recruiters tend to favor their family members, relatives, or friends. This explains the concept of nepotism in the modern workplace. To substantiate, nepotism is the act of misusing power or influence to offer an undue advantage to family members or friends, especially in terms of career opportunities. 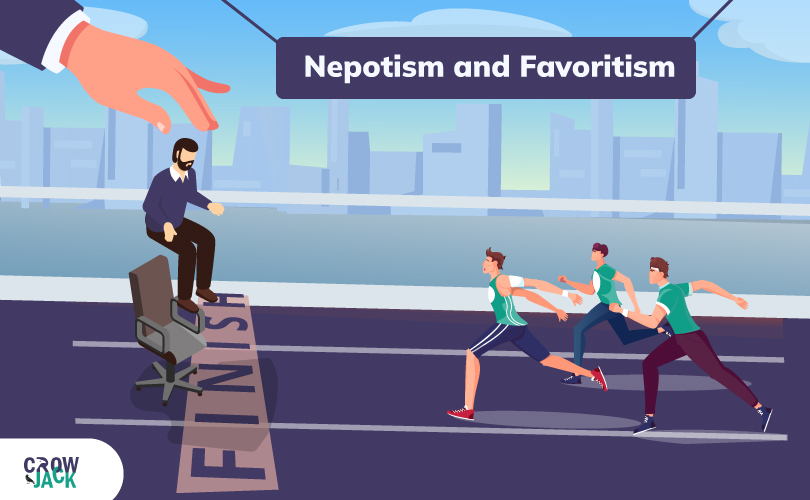 Needless to say, any act of nepotism or favoritism in the workplace is ethically inappropriate as it deprives the deserving candidates of their fair share of growth prospects. Subsequently, it may lead to unethical behaviors and attitudes among those who feel alienated and victimized by nepotism hence, further escalating ethical issues.

Even if an employer hires a non-deserving candidate because of a personal connection, there are many ways in which the business may also suffer because of this unethical practice. Some of the issues that businesses might face, due to the practice of nepotism in a workplace are mentioned below

Issues in a workplace because of nepotism 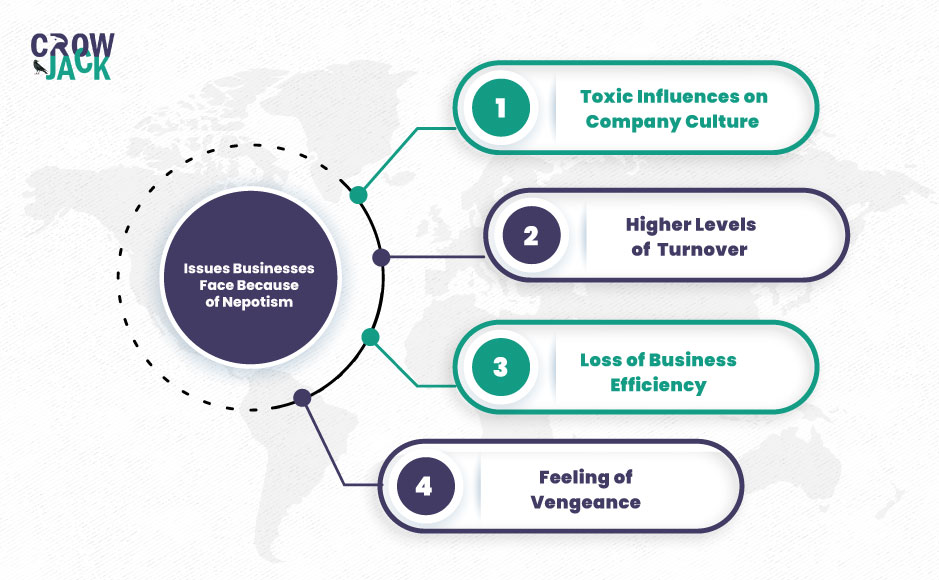 Acts of nepotism or favoritism can lead to negative influences in the workplace harming the company culture. It will create a high degree of negativity among employees who will begin to feel that they will never have access to their deserving opportunities no matter how diligently they discharge their work commitments.

Further, such influences and conversations in the workplace also affect the morale of the recruits coming into an organization. Subsequently, cultural issues will directly impact business profitability and revenue. To explain, as cited by Forbes, strong company cultures can lead to 4X amplification in company revenues. It would not be incorrect to say that even vice versa is true and negative cultures can hit revenues.

2. Higher levels of disengagement and turnover

When sincere employees become victims of nepotism or office politics, they begin to lose their motivation and hence, start inching towards disengagement. The same holds for other employees who see their colleagues as victims of unfair favoritism. Overall, the rates of disengagement begin to rise and further translate into high turnover rates.

4. Feeling of vengeance among employeess

It can also possibly happen that employees who feel left out from their share of well-deserved opportunities in the organization may develop a feeling of vengeance. In such a scenario, they will feel personally attacked by nepotism from the top management and might conspire or collaborate with competitors to harm their employer. Their overdriving emotion would be to take revenge on the organization for not giving them their dues. Because of that, organizations can suffer hefty losses.

Probing further, there are different methods in which the issue of nepotism can be avoided, and below are some methods for employers to deal with this particular ethical issue.

Measures to avoid nepotism in a workplace

Transparency in the recruiting culture eliminates the suspicion of employees towards unethical hiring practices and will assist in strengthening the unity among the team. It is noteworthy that transparency should reflect in the policy framework of the organization and not just an ideal virtue.

3. Integration of AI in recruitment

With the incorporation of AI in hiring, organizations cannot only boost candidate experience but also improve hiring decisions in terms of eliminating human bias. With AI technologies, systems can match the resumes of the applicants with the job specifications and prerequisite skills in a more optimized way without any bias.

When it comes to promotions, the decision-making should be inclusive and the central idea should be to establish consensus among all board members and shareholders of the company. The decision-making policies ought to be as inclusive as possible while offering every stakeholder a fair chance to share their opinions on a key appointment or change in the leadership theories applied by employers.

Probing further, a case study of a company is presented in order to give a clear comprehension of the concept and how practicing nepotism in a workplace can create a problem for the company.

Samsung Electronics Co. Ltd, a well-known multinational electronics corporation, recently landed in a major controversy emerging from allegations of nepotism. To elaborate, Samsung recently announced the appointment of the chairman’s son Lee Jae Yong as the company’s vice president. When Samsung announced its decision, multiple shareholders strongly objected that the decision was not taken democratically and was purely endorsed from the viewpoint of nepotism.

Probing further, the PSPD(People's Solidarity of Participatory Democracy) group has been fighting continuously over the past three years for the rights of minority shareholders at Korean chaebols. After the announcement of the big decision, the group openly criticized the move. To elaborate, the PSPD's leader, Jang Ha Sung, criticized the decision claiming that the chairman’s son was not qualified enough for the position and that this decision was solely influenced by nepotism. Further elaborating, the PSPD argued that it is crucial for an organization to have an independent board for hiring in order to eliminate monopolizing the decision-making process.

On the contrary, the company denied the accusations of nepotism and stated that Mr. Lee will deal with the transparency issues of the company and will implement different strategies to enhance the financial value of the shareholders of the company. This case study clearly depicts the prevalence of nepotism in the contemporary corporate world even among organizations that make claims of complete transparency.

Key takeaway - With this case study, we got to know that the company’s unethical practice of not hiring democratically created the issue internally in the company and shareholders somehow lost faith in the effective decision-making process of the company. Hence, these kinds of practices should be avoided in the workplace to avoid the situation of mistrust in the company.