Comprehensive Elaboration of Technology Exploitation in a Workplace

State-of-the-art technologies like artificial intelligence and blockchain technology are driving major transitions in the corporate world helping businesses scale new heights. These technologies are leading to major transformations in the ways how businesses have operated traditionally. Undoubtedly, these changes are for the better and offer a broad scope of scalability. However, these technologies need to be used within ethical limits to negate the scope of their inappropriate and unchecked usage. 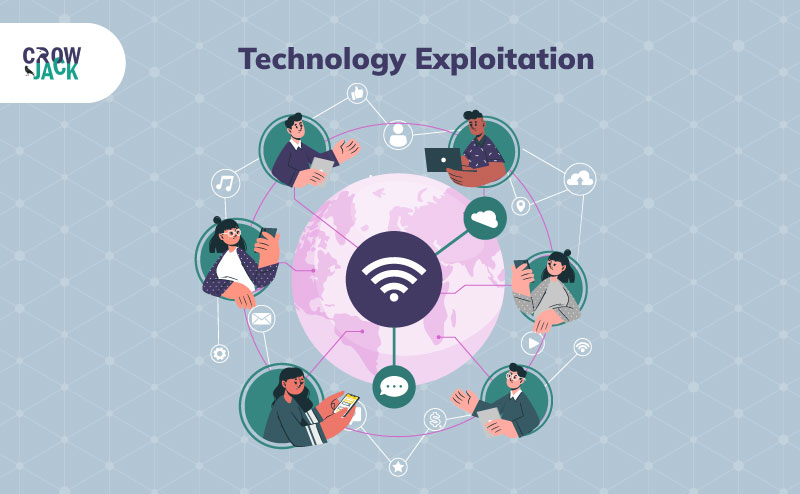 To elaborate, technological integrations also raise several concerns. Threats like loss of productivity, breach of privacy concerns, biases of AI, widespread fake information, and unchecked use of business technologies are some ethical issues that need to be addressed. In addition, consumers all around the globe nowadays are concerned about their privacy because of easier access to their private information because of technological advancements.

To continue, detailed elaboration on the issues faced by the workplace due to unethical technological practices are mentioned below

Issues due to Exploitation of Technology 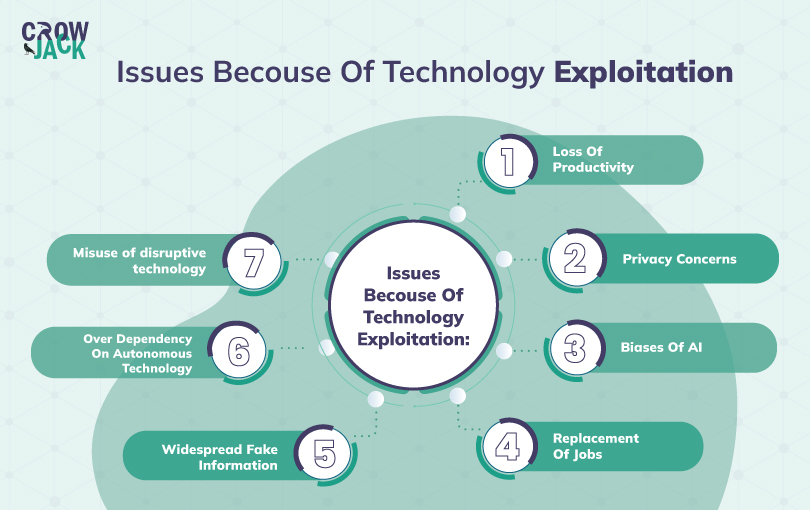 Using technologies for sending personal emails, playing games during working hours, or visiting shopping sites are some of the common abuses of technology that every employer observes at the workplace. To validate, according to a survey, of almost 30,000 professional employees, it was concluded that one of the three employees was guilty of at least one case of technology abuse mentioned above. This not only affects the productivity of the employees but also results in a loss of time and money wastage for the companies.

One of the biggest concerns that revolve around technology is the privacy concerns of both consumers and employers. Employers' concern is related to a breach of sensitive information that can make a company lose its competitive advantage whereas consumers are concerned about the misuse of the information they are providing to the company in exchange for the services.

Although artificial intelligence has managed to automate many repetitive tasks of humans, on the other hand, bad data and algorithm's limited exposure to information is increasing biases of the technology around all industries that are causing loss to the companies.

According to Builtin, technologies like AI are predicted to replace almost 85 million jobs worldwide by 2025. Increasing concern about replacing humans and increasing the unemployment rate with technology is giving rise to another ethical issue.

Dissemination of information without cross-checking on various platforms has increased the chances of spreading falsified information that can damage an organization's reputation intentionally or unintentionally.

6. Over dependency on autonomous technology

Autonomous technology is rapidly growing and is making its space in every industry. The excessive dependency of humans on multiple autonomous technologies like self-driven vehicles and robots is increasing day by day. However, showing immense trust in technology and prioritizing it over human intelligence has become an ethical issue in the business world. It has led to a scenario where humans are being discriminated against on the assertion that autonomous technology can render greater efficiency.

Probing further, there are many other methods that can be adopted by businesses to assure their consumers about the safe utilization of their data.

However, if we talk about employers' concerns about privacy, there are various methods that can be effectively utilized to ensure data security in the organization.

1. Implementing actionable strict policies - Strict policies regarding the prohibition on whistle-blowing of a company's personal information should be implemented with clearly stating the serious consequences. This will make sure no employee in the company can misuse sensitive information for their or competitor's benefit.

2. Stating clear expectations and surveillance of working culture - During the onboarding process of employees, the employer should clear all expectations they have from employees of not indulging in unnecessary activities during working hours. Moreover, keeping surveillance on employees' activities will make sure that employees are not wasting their time doing personal work during office hours which can affect the accomplishment of the SMART goals of the company.

3. Conducting regular AI assessments - Conducting multiple assessments with different technological tools available can assist in detecting and mitigating the biases in the artificial intelligence model. In addition, AI’s predictions can be closely monitored and analyzed with the help of regular assessments and different tools.

Many companies in history are accused of using technology to violate the rights of consumers. Let's take a look at a real-life example of how one of the biggest companies in the world today used technology unethically for their own monetary benefits.

The case belonged to one of the biggest social networking sites all over the globe, Facebook 2018. The U.S trade commission alleged that Facebook shared information of almost 87 million users with the British political consulting firm Cambridge Analytica, a consulting firm for their political campaign without the consent of users in exchange for monetary benefits.

Firstly, the CEO of Facebook denied the allegations of sharing information illegally with any other firm. However, when proven guilty, Facebook faced public criticism and pledged to perform better in protecting users' data.

As a consequence of the breach, Facebook experienced a 17% fall in share price and was asked to implement strict laws on the privacy of users' personal information. In addition to this, the FTC (Federal Trade Commission) imposed a $5 billion fine on Facebook for its unethical behavior of handling sensitive information without the user's consent to the third party. Cambridge Analytica, on the other hand, failed to show its innocence, and as a result, it was decided that the corporation was no longer appropriate to continue operating within the government.

Key takeaway - The company’s greed for extra monetary benefits cost them their reputation, share fall, and a penalty of $5 billion in exchange for their unethical action. Therefore, it is really crucial for companies to not misuse any type of technology for extra financial benefits.