A Fastidious and Elaborate SWOT Analysis of General Motors

General Motors is a renowned automobile manufacturer in the US and has been a dominant leader in the American automotive market for many years with a market share in double digits. The company was incorporated in 1908 and is headquartered in Detroit, US. Besides, it has also been able to expand beyond its home market and has a significant presence in emerging economies like China. With a market capitalization of more than 51 Billion USD, General Motors is among the top 300 most valuable companies in the world.

This article presents a delineated SWOT analysis of General Motors delving deep into the strengths and weaknesses of the company. Further, the analysis also diligently discusses the opportunities and threats in the external business environment with respect to the automotive industry. Besides, for an elaborate knowledge of SWOT analysis, you can read our all-inclusive SWOT analysis guide.

A sincere and insightful SWOT analysis of General Motors 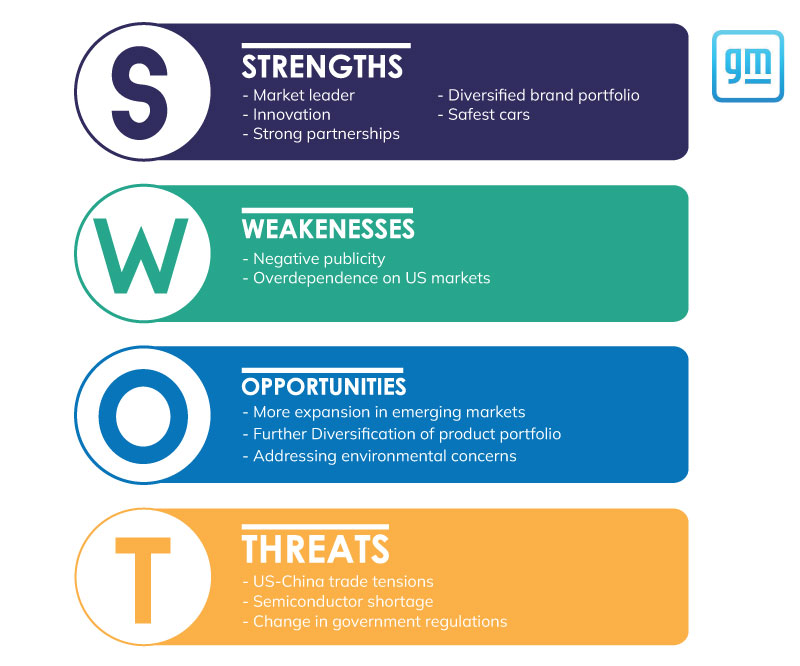 To encapsulate, General Motors has a strong presence in the US market and different brands and products provide it with the advantage of targeting different customer segments including the lovers of luxury, sporty as well as affordable cars. However, the company faces serious issues in terms of lying about its operations, and the current shortage of semiconductor chips can act as a barrier to further enhancement of the business. Furthermore, if you wish to analyze the external factors influencing the company, you can check out our detailed PESTLE Analysis of General Motors.

Red Hat. (2022). Red Hat and General Motors Collaborate to Trailblaze the Future of Software-Defined Vehicles. www.redhat.com. Retrieved 16 May 2022, from https://www.redhat.com/en/about/press-releases/red-hat-and-general-motors-collaborate-trailblaze-future-software-defined-vehicles.

The world is embracing a digital revolution with content at the epicenter of swift digitalization.