A Scrupulous and Sensible SWOT Analysis of Kia

In a short span of time, Kia has established itself as one of the most successful automotive companies in the global landscape. Interestingly, Kia is a subsidiary of Hyundai and is one of the leading car manufacturers based in South Korea. With a market capitalization of USD 24.5 billion, Kia is scaling new heights and is posing tough competition to the likes of Toyota, Honda, Maruti Suzuki, and other giants in the global automotive market.

This article offers an engaging and insightful SWOT analysis delving into the strengths and weaknesses of the company. Further, the analysis assesses the opportunities for Kia in the external environment and also the threats that need to be mitigated.

You can also read about the PESTLE analysis of Kia to see how various parameters in the external environment can affect Kia. So, let’s get started with the SWOT analysis of Kia.

So, let us get started without further ado

An insightful and engaging SWOT analysis of Kia 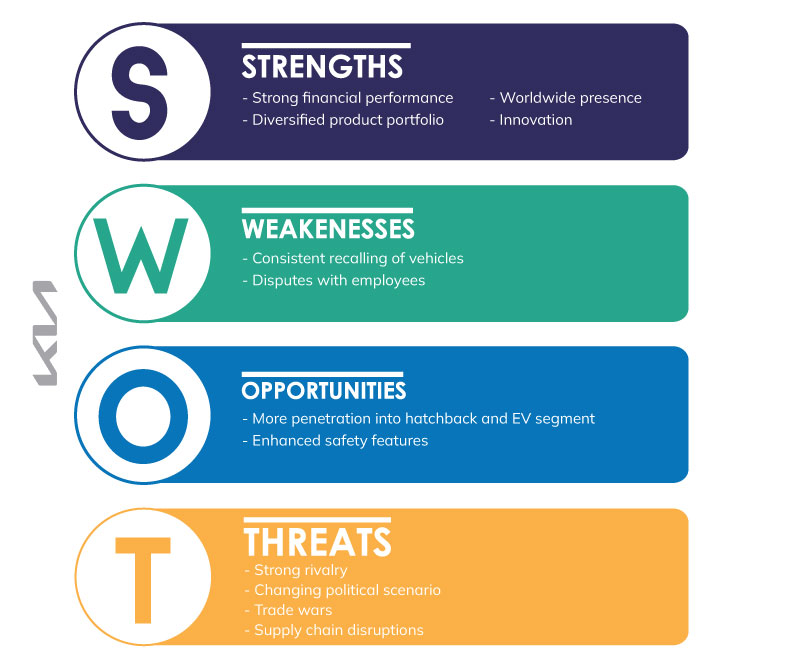 To encapsulate, Kia has a vast presence worldwide and sells its vehicles in close to 170 nations. The company tries to be at the front in the market with continuous innovation and it has an advantage in terms of strong finances wherein the sales of the company are rising as well as the earnings per share are also witnessing a significant increase. The negative aspect for the company can be the weak relations with the employees and the frequent issues in the vehicles. However, the company stands an excellent opportunity to enhance its presence in the market by launching more EVs and hatchbacks. The company needs to find appropriate solutions for the ongoing shortage of chips globally as its production capacity can be significantly impacted because of the unavailability of chips. Also, you can read the PESTLE Analysis of Kia to determine how the macroenvironment factors influence the company or the automotive industry.