A Worthwhile and Pragmatic SWOT Analysis of British Airways

British Airways is a globally renowned commercial airline company headquartered in London, United Kingdom. The company claims to have more than 100 years of experience in customer service and has a global workforce with more than 30000 individuals working for the company. Even though it is the flagship airline company in the UK, it is well known across all parts of the globe as one of the most popular airline brands. The company has a large and diversified fleet of aircraft ranging from Airbus A320 to Boeing 787. Further, an internal analysis of the company will give effective insights into the company’s capabilities in terms of its competitiveness. 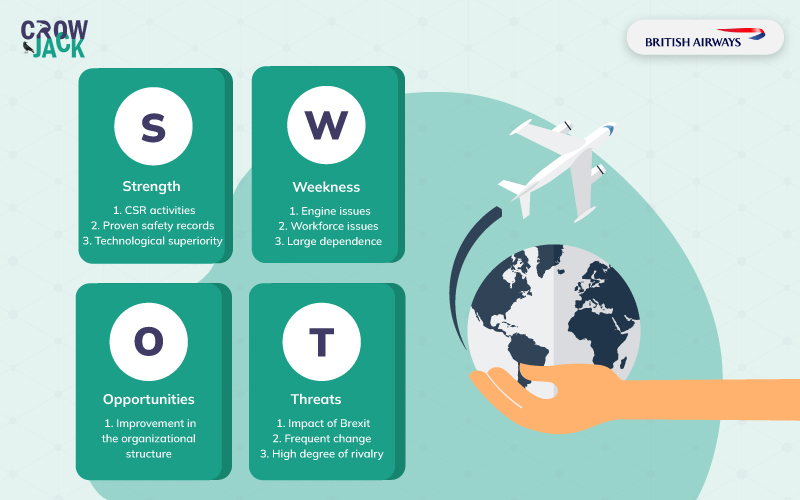 To conclude, it can be seen that the utilization of various technologies and focus on sustainability aspect can be a positive thing for British Airways as it would lead to efficiency in the operations along with gaining an edge over competitors and enhance the image among various stakeholders. The huge fleet of aircraft and partnerships with various companies can assist in expanding the range of the operations. However various employee-related concerns and concentration on one market can be a cause of worry. Besides, if you wish to analyze the company as per the external business environment, you can go through our coherent PESTLE Analysis of British Airways.

PETERS, L. (2022). Could IAG Be Forced To Dump BA Because Of Brexit?. simpleflying.com. Retrieved 13 July 2022, from https://simpleflying.com/could-iag-be-forced-to-dump-ba-because-of-brexit/.