A Worthwhile and Intelligible SWOT Analysis of Boeing

Boeing, headquartered in Virginia, US is one of the world’s leading aerospace company and manufacturer of commercial and defense aircraft. With a market capitalization of USD 82.3 billion, Boeing is among the most successful companies in the world. Boeing is known for highly sophisticated amd advanced range of military aircraft including Globemaster III, F-15 fighter jets, Apache helicopters, P-8, Super Hornet and so on. Also, its commercial range of aircraft includes 767, 787, 777 and so on. In fact, Boeing is also the manufacturer of the highly popular Air Force 1 used by the American President.

In this meticulous article, we put forth a detailed SWOT analysis of Boeing delving deep into the internal capabilities of Boeing. Also, the article looks into the opportunities and threats available for the company in the external environment. Besides, if you wish to learn about SWOT analysis in detail, you can go through our extensive guide on SWOT Analysis. For now, let us get started with the SWOT Analysis of Boeing.

An All-inclusive and Astute SWOT Analysis of Boeing 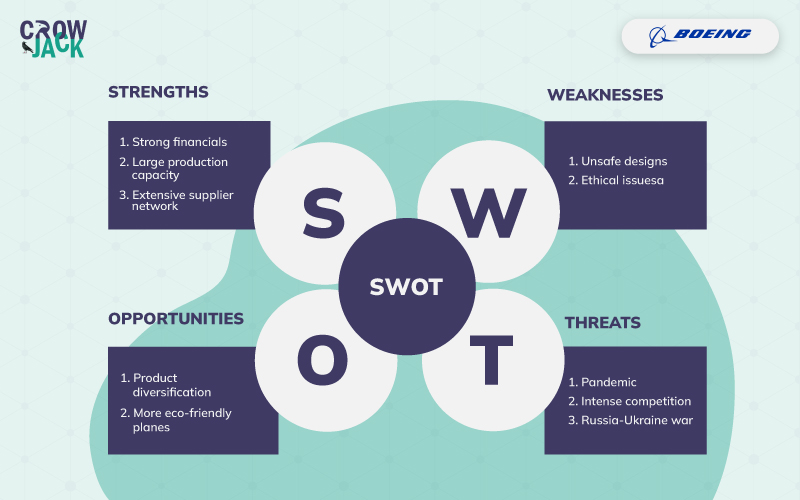 To encapsulate, it can be said that Boeing has a large amount of cash flow in its reserves which can help overcome the current uncertain business environment at present. However, the company must focus on the safety aspect of a few of its models like Max 747 and 737 which have been through multiple accidents and resulted in numerous fatalities. In case you wish to delve into how external influences affect Boeing, you can go through our delineated PESTLE Analysis of Boeing.

The world is embracing a digital revolution with content at the epicenter of swift digitalization.