Toyota is a Japanese automobile manufacturer. The company has its presence throughout the world with current operations in more than 170 countries. The company employs more than 360,000 personnel in its facilities worldwide (Carlier, 2021). It earned a revenue of $245 billion in 2021 and more than 90% of its revenue is generated through automotive sales. The highest selling vehicles of Toyota include Toyota Corolla with more than 1 million sales annually. Other models include RAV-4 which occupied the third position in overall vehicle sales in 2020 (Ashraf, 2022).

The following article featuring Toyota external analysis would analyze the impact of the external environment related to politics, economy, social patterns, technology, legal policies, and the environmental forces on the automobile industry. Besides, if you want to acquire comprehensive knowledge of the PESTLE Model, you can go through our elaborate PESTLE Analysis Guide. For now, let us get started with the external analysis of Toyota using the PESTLE Model.

A precise and sincere PESTLE Analysis of Toyota

Japan has witnessed frequent changes in administration, three different prime ministers have ruled the country in the last 3 years. The change of leadership on a regular basis can cause uncertainty in the business fraternity as the policies can change quickly. This can cause companies to rethink their strategies for expanding their operations in the country (CSIS, 2021). The Japanese government has formulated a policy wherein all the cars sold by 2035 would be environmentally friendly (International Trade Administration, 2021). The Japanese government has introduced a system wherein the taxes on newly purchased vehicles after October 2019 for engines below 2000cc would be reduced by 10% every year to an upper limit of 4500 Yen. This relief by the government can lead to a reduction in the price of the cars, thereby leading to an increase in the sales of the auto industry (Ministry of Economy, Trade, and Industry, 2019).

Moreover, as India is also one of the emerging markets for the automobile industry, the government is also promoting electric vehicles on a huge scale, it has set aside a budget of $500 million, hence leading to an increase in concerns for the automobile companies engaged in more production of gasoline-run vehicles.

Further, the taxation system for automobiles in India is highly unfavorable as 28% GST is imposed by the federal government on vehicles above 1500 cc along with the registration fees and other charges (Srivastava, 2021). The high taxation would lead to an increase in the prices of cars by manifolds which would reduce the affordability of many customers, this having a negative impact on the sales of the auto industry.

However, it is also noteworthy that the auto industry is having production issues due to the global chip shortage as a result of COVID and the production could further get impacted because of the ongoing war between Russia-Ukraine as Ukraine is the major supplier of the neon supplies used to manufacture the semiconductor chips.

Japan’s economy is ranked high, it is the second-largest Asian economy in Asia while among the top-performing economies of the world, it is placed at number three. The growth rate in Japan is expected to be 1.8% by the end of FY2021 and increase to 3.4% in 2022 and then further decrease to 1.1% in 2023 (OECD, 2021). Further, the unemployment rate in Japan is consistent over the last 1 year at less than 2%, it was 2.9% in Feb 2021, 2.6% in March, 2.8% in Nov and 2.7% in December respectively, and is expected to be 2.5% by Q1 2022 and would stay the same. The huge fluctuation in growth rate and no positive increase in the employment levels would lead to a decrease in the income and spending capacity of the people, thus there would be a negative impact on the sales of the automotive companies. This can further have a negative impact on the profit margin of the companies in the industry.

India, one of the major markets for the automobile industry, is expected to grow at 8.3% by the end of FY2021 (FY, 2022). Further, the economy is expected to grow at 8.7% in 2022 and 6.6% in 2023 (Singh, 2022). Also, India’s growth rate is one of the highest in the world. The unemployment rate in India is 6.5%, the lowest since March last year. As employment is gaining momentum, more people would be having a fixed source of income which would lead to an increase in the sales of the automobile industry.

The consumer preference both in India and Japan is witnessing a shift and more than 59% and 82% of customers prefer buying electric vehicles as their new car because of various factors like environmental concerns and lower fuel costs, hence the companies need to focus more on the production of EV’s to ensure the long term sustainability (TOI, 2022). Further, In India, more than 78% of people prefer using personal vehicles after COVID due to health and safety concerns.

Further, Indian consumers are shifting to utility vehicles from sedans and hatchbacks and this can be a great opportunity for many companies to explore new markets. In addition, nearly one-third of the customers in India prefer safety over other features and they are ready to pay more for safer cars. Also, while expanding to developing countries, the companies need to be considerate of the key cultural dimensions pertaining to their respective countries.

Further, various technologies have emerged in the automobile industry that including autonomous vehicles wherein the vehicles have the ability to steer themselves by detecting their surroundings based on the sensors and the vehicles can automatically maintain a safe distance from the traffic ahead.

Furthermore, big data analytics is gaining importance wherein the vehicles are equipped with automatic braking systems, collision warning systems, and parking assist systems. This can lead to enhanced safety of the passengers.

Besides, needless to say, for successful integration of the emerging technologies, automotive companies will have to depend on effective change management models.

The Road Vehicles Act governs the automobile industry in Japan and establishes standards for the manufacturing of vehicles. Japan also has a strong Intellectual Property system in place and the company can get their idea or technology patented for a period of 25 years.

The companies can exploit this opportunity and earn a great amount of revenue by innovating with their products. Alongside Japan, the auto industry is also regulated in India wherein the Motor Vehicles Act specifies laws related to companies and car users.

The recent amendment in the motor vehicles act wherein it is mandatory for the companies to deploy 6 airbags in the cars from 2023 would lead to an increase in the prices of the cars. Further, the amendments in the Motor Vehicle Act also empower the federal government to impose fines on the companies if the vehicles get recalled frequently and the government can itself order the companies to recall the vehicles if the vehicles are found to be polluting the environment or deemed unfit for the safety of the passenger. Also, the automotive industry spends the most on research and development as illustrated in the graphic below. 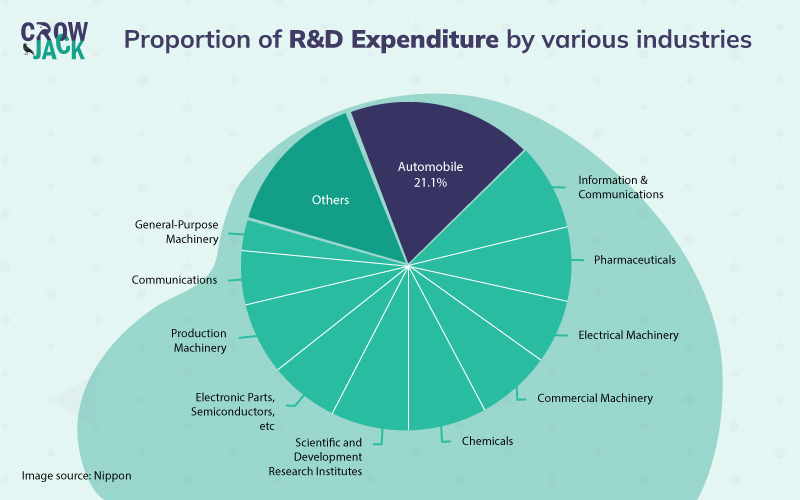 Automobile industry in Japan produces about 5.83 million metric tons of carbon emissions (Klien, 2021). The Japanese government has established targets of reducing greenhouse gas emissions by 43% by 2030 and a target of net zero emissions by 2050.

The high targets of reducing carbon emissions can put a financial burden on the companies as they would have to research different technologies for the vehicles. It has become important for automotive companies to address environmental ethical issues prevailing in the industry.

Furthermore, auto companies have to abide by several environmental regulations in India as well. These include The Environment Act and the Air Prevention and Control of Pollution Act. For example, two state governments of Delhi and Haryana have been tough on air pollution and recently announced the banning of registration of petrol vehicles above 10 years and diesel vehicles above 15 years.

This would force customers to purchase new vehicles. Further, the federal government’s order requiring companies to mandatorily cut the emission from their vehicles from 2023 by 13% would lead to an increase in their research budget.

To conclude, the automobile industry has a huge EV opportunity as the demand for EVs in both the Japanese and Indian market is on the rise with more than 50% and 80% of people preferring EVs over gasoline vehicles respectively. Japan has a strong IP system wherein the companies can avail the patents for 25 years.

More and more companies can enhance the efficiency of their vehicles by implementing automatic brake systems or collision alert systems. Also, the two states in India Delhi and Haryana have banned the re-registration of vehicles so the companies can exploit this opportunity. Moreover, to read about the internal capabilities of the company, you can go through are sincerely conducted SWOT Analysis of Toyota.