In the book “The Human Side of Enterprise”, the author, Douglas McGregor proposed two contradicting theories in the 1960s. The prominent social psychologist states that there are two styles of management, authoritative and participative, that are used by managers to get the best out of their team. The styles of management picked by the managers decide a lot about the growth and success of an organization. To continue, he named the authoritative approach of management Theory X and the participative approach Theory Y. 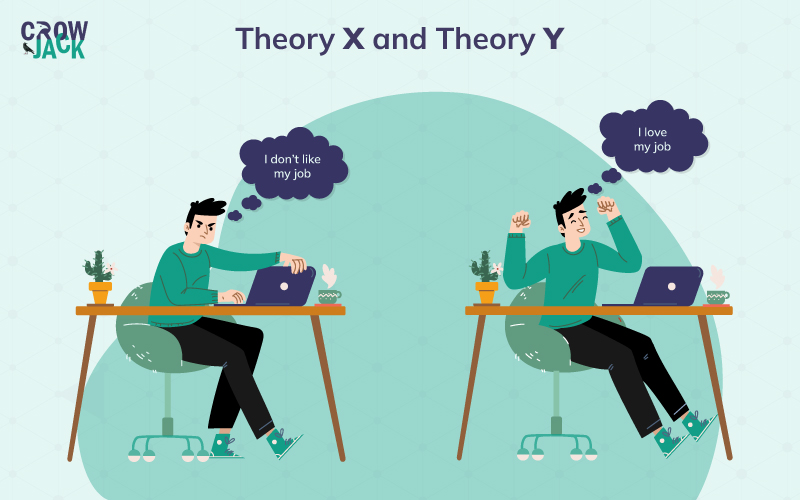 In this approach, the theorist stated that managers' behavior depends upon the following assumptions about their teams.

In such cases, the theory states that employers or managers use the approach of micromanagement with employees to get the desired work done. Managers tend to have a pessimistic view of their team members and do not trust or can rely upon their team. In this theory, the authority of effective decision-making remains in the hands of managers or upper management, and powers remain centralized.

The theory further discusses that managers utilize the approach of ‘carrot-and-stick’ to motivate employees to give their all in the escalation of business. To elaborate, the carrot and stick approach refers to a carrot ( a reward for performing good) and a stick ( giving punishment for doing it wrong or refusing to do it) in order to persuade the workers to get the work done.

On the contrary, In the theory Y, Douglas McGregor assumes that managers are happy and satisfied with the employees because of the following reasons

To continue, the theory further states that employees trust their employees and use a collaborative approach to excel in the growth of the business. Continuing further, managers tend to have an optimistic point of view toward their team and the ‘hands-off’ approach is used by managers.

To further elaborate, the hands-off approach in management also known as macro-management refers to the approach when managers have confidence in their teams and are not much involved in the day-to-day activities of the employees. Managers with these approaches focus on the results and effectiveness of the work rather than focusing on the process.

Probing further, the next section will focus on the process of applying the following theories in the workplace.

Implementing the theory in a workplace

1. Identify the behavior of the employees

The first and foremost step that needs to be taken by managers is to analyze and identify the behavior of the employees. This will assist in creating effective strategies further to get the most out of the employees for the growth of the organization.

2. If according to the managers, the employees fall under the category of the theory X, then the following strategies can be implemented in the workplace

Rewards and recognition are some of the most effective strategies that can be implemented to motivate employees in a workplace. Hence, managers can provide multiple rewards in accordance with the needs of the employees to encourage and appreciate them for their invested efforts. This will not only motivate the employee who gets the rewards but will also motivate other employees to perform better in order to receive the rewards and appreciation from managers.

When employees have to submit the list providing the work done in a day, it will encourage them to be more productive as they know that they will have the fear of being questioned by the end of the day.

Stating the clear consequences of not following deadlines

Punishing the employees for not working according to the deadlines can reflect the zero-tolerance of managers regarding carelessness and irresponsible behavior of employees. This will encourage employees to be more responsible and follow the deadlines.

3. On the contrary, if the behavior of the employees is similar to theory Y, in that case, some of the below-mentioned tactics can be implemented by the managers.

Encouraging the decentralization of authority

Deconstruction of authority among the employees can be done to make them more responsible and giving them power will also make them feel belonged to the organization. This will encourage them to be more engaged and feel more authoritative in the organization.

Promoting the culture of open communication

Encouraging the culture of open communication using 7Cs of communication will lead to more trust and better relationships within the organization. This can assist employees in coming forward without any fear of upper management to express their point of view and commit in a better and more efficient manner to the organization.

Moving ahead, the further section will shed light on highlighting the importance of the implications of both the theories in the workplace.

Importance of implementing the theories in a workplace

Limitations of the theories

1. It can encourage turnover

2. It can affect the employer’s brand

If employees are not happy with the management approach of the organization, then they might share their bad experience with the company which can further damage the reputation of the company and affects the employer's brand negatively.

3. It may not be relevant in the contemporary world

As discussed above, in the contemporary world, organizations are more employee-centric and are trying various methods to retain employees for a long time. Hence, implementing theory X might not be that effective in today’s business world.

4. It can create a toxic environment

Continuously interfering in the working process can encourage employees to lose faith in the management process and can lead to creating a toxic work environment.

Using a hands-off approach for employees can give them excessive freedom sometimes which can assist employees in losing focus and making them careless towards the work.

With no fear of supervision, employees can take multiple advantages like wasting office hours doing personal work and scrolling through social media during working which can lead to loss of cost and time to the employers.

3. Lead to fraud or scandals

Excessive trust in employees and involving them in the major decision-making process carrying sensitive information can lead to an increase in the probability of fraud and scandal occurrences.

1. Not all employees are the same

One of the biggest limitations was that the whole concept given by McGregor was based on the theory of “one size fits all’ which might not be necessarily true in the case of most organizations today. The theory failed to acknowledge the perspective of different individuals.

2. Based on a high degree of assumption

Both the theories are based on a high degree of assumption and no statistical data is provided as evidence. This decreases the credibility and reliability of the theory in the modern world.

Moving ahead, below given is the real-life case study of Coca-Cola experimenting with both the theories, Theory X and Theory Y in the organizational structure and then implementing the more successful one.

Example explaining the implementation of the theory

Coca-Cola is a multinational beverage corporation headquartered in Atlanta, Georgia. The company serves more than 1.9 Billion drinks in more than 200 countries every single day and employs almost 700,000 individuals across the globe.

Earlier, Coca-Cola used to practice the implication of Theory X in the organizational structure of the company. To elaborate, the chain of command in the organization always remains centralized and managers have to closely examine the work of employees. However, with time, the productivity of the employees decreased, and this started costing a monetary loss to the company.

After some time, the management decided to apply Theory Y in the organizational structure and decided to divide management into 2 operating groups named Bottling Investments and The Corporate Group. Further, the two groups got decentralized based on their geographical locations. This decentralization of the command assisted the company to focus more on other important decisions like marketing, branding, and pricing essential for the success of the company. Decentralization of the command also made employees more responsible and feel more belonged to the organization that assisted in engaging employees in a more efficient and effective manner.

Key takeaway - Through this case study, we observed that the implication of theory X in the modern world encouraged the disengagement of the employees. Whereas, Theory Y helped in the decentralization of the command and increased the productivity of the employees by engaging them.