This theory was developed by David McClelland in 1961 and was presented in his book, "The Achieving Society." This theory was influenced by Maslow’s Hierarchy of Needs Theory where Maslow stated 5 categories of needs. However, in McClelland’s Achievement Theory, the theorist stated that every individual irrespective of their gender, age, and culture, is driven by only 3 types of needs. In addition, he stated one of the three needs dominates the other two and the dominating needs will be influenced by one’s culture and lifestyle. Moreover, McClelland states that people are not inherent but are infused or learned with time and that is the reason this theory is called the Learned Needs Theory. 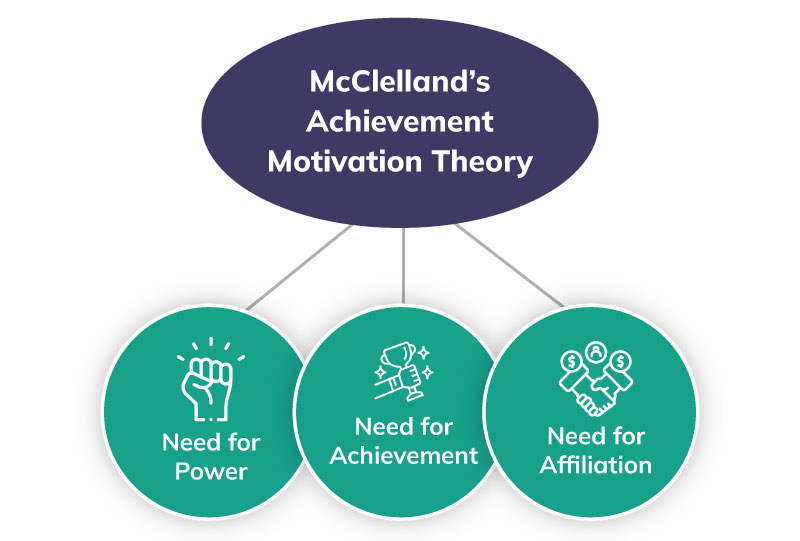 Probing further, below mentioned are the three primary hypotheses that were proposed by McCelland in the theory.

1. The need for achievement (n Ach)

People who like to have power in a hand or like to be in charge in order to dominate or influence others are included under this category. The identifying marks of this category are

3. The need for affiliation (nAff)

People under this category love to affiliate and always want to stay in groups and value society and relationships over everything else. They can be identified by the following features

Moving ahead, after understanding the theory, the next section sheds light on the implication of the theory in a workplace

1. Understanding and identifying the dominators

The first step for the manager will be to understand and analyze the employees' behavior and identify the major need that dominates their behavior. This will assist in effectively creating further strategies to keep the employees motivated and satisfied.

2.Assigning the task according to the needs

To continue, this theory holds great importance when it comes to its implementation of this theory in an organization. Below mentioned are some of the key points highlighting the importance of McClelland's achievement theory.

Importance of implementing this theory in a workplace

Probing further, although this theory is much more relatable in the real world, this theory has certain limitations when implied in a workplace.

To substantiate the effect of the theory, a hypothetical example is given below to illustrate the implication in the workplace.

As of March 2022, Tesla has a Market capitalization of $1.032 Trillion and this amount made Tesla the World’s 6th most valuable company. The success of Tesla and the leadership style of CEO, Elon Musk, are not hidden from anyone.

Implementing McClelland’s Achievement Motivation Theory, we observed that Tesla fulfills the need for power, the need for affiliation, and the need for achievement in the best possible manner to motivate the employees. To elaborate,

The CEO believes that communication in Tesla should not travel through the chain of command. Instead, they give every individual to make decisions based on their ability and convey it to the management via the shortest route possible. Instead of following a hierarchy, the CEO directs his employees to directly communicate with the concerned person. This satisfies the need for the power of the employees by giving them enough power to make decisions or get involved in the crucial decision-making process.

2. The need for affiliation

Everybody is aware of the fact that Tesla never believed in binding their employees to certain groups or management. Instead, they believe in having fun and bringing revolution at the same time. This assists in satisfying the need for affiliation of the employees because this gives them the liberty to socialize and bring new and innovative ideas that can assist in the growth of the company.

Last but not the least, being an employee-centric company, Tesla believes in celebrating the achievement of every milestone together and believes in appreciating the employees for investing their hard work and dedication towards the growth of the company. These celebrations assist in the attainment of the need for achievements of the employees.

Key Takeaway - Fulfilling all the needs of the theory helped the company in creating a productive and positive environment which further contributes to the success of the company.